3 Reasons Why The Bitcoin Whitepaper Is Really About Human Nature

The wild fluctuations of bitcoin prices has thrown bitcoin into the media’s limelight especially for the past year. Yet how many people know exactly why bitcoin is created? Against this context, today’s post is on the 3 reasons as to why the bitcoin whitepaper is really about human nature, more than “a technical paper”. You can read the original bitcoin whitepaper by a certain “Nakamoto Satoshi” here.

Reason #1: The bitcoin whitepaper is written with the assumption that human beings will sometimes abuse a trust-based system. 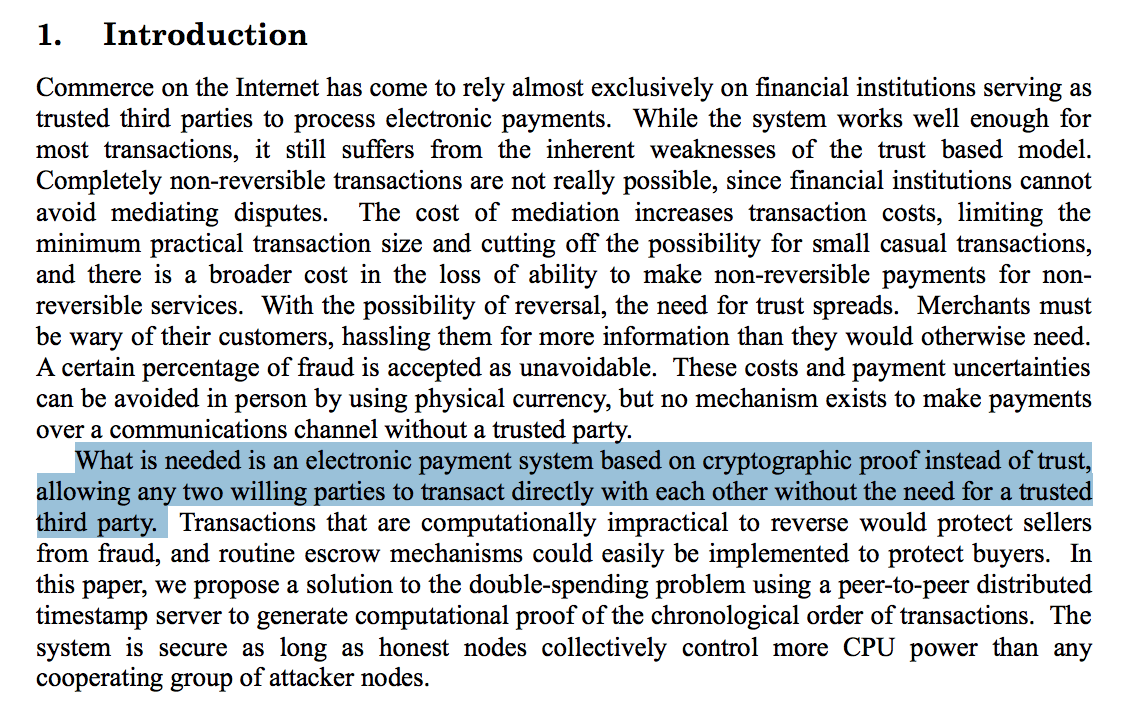 If you were to read the two paragraphs carefully, it is clear that Nakamoto Satoshi wrote the bitcoin whitepaper with the proposition that human beings cannot be trusted. Here, it is essential to note the following:

What are the implications of the above? They are as follow:

The overall conclusion now is therefore that intentions do not matter–only interests do. And this is an extremely powerful conclusion in the bitcoin discourse (and in general, cryptocurrency ecosystem today).

Okay, let’s go back to the assumption that Satoshi probably assumes that human beings cannot be trusted at the core, due to human nature.

The verifiable answer is simple: statistics have shown that as long as you have announced a pending ICO, you will inevitably attract hackers. They will then do malicious attacks into your ICO site or personal accounts. Obviously not all human beings will have such intentions to launch malicious attacks, and not all skilled people who can be hackers will choose to exploit the vulnerabilities in the system.

But some would. If you’re raising 50million USD, 5 minutes of access to the founder’s personal social media account and a fake tweet is all it takes (consider the compromised security of ENIGMA ICO) for scammers to financially profit immensely via the hacking.

Therefore, the principle underlying Satoshi’s paper is to expect the worst of human beings, but hope for the best. His paper is elegant this way because it talks not only about positive intentions, but ALSO the use of Mathematics as a system to structure and align intentions of all parties.

Reason #2: Satoshi posits that a system that rewards self-interest, on top of benevolence (aka “kind/ positive intentions”) will create maximum welfare benefits for society.

Let’s note here that self-interest and positive intentions are not mutually exclusive.

The successful implementation of this philosophy has one important condition– that you operate in a system that is Mathematically-based. So Satoshi’s actually saying that by being self-interested and putting your needs and desires first within this systemic framework, you will actually create a lot of side-effects/ precedence that will lead to a better world for all.

Now, this philosophy of pursuing self-interest over doing things simply out of kind intentions (and leaving methods to experimentation and chance) is similar to Adam Smith’s philosophy, when Smith wrote “The Wealth of Nations”.

“It is not from the benevolence of the butcher, the brewer, or the baker, that we can expect our dinner, but from their regard to their own interest.”

So Satoshi already said that it’s a good start to have positive intentions, AND his white paper also purports the idea that the mechanism to spread this positive intentions is not by some voodoo chance or halfhearted bullshit experimentation, but by a irrefutable Mathematical system that best aligns the interests of all parties.

Just look at the elegance of the mathematical formulae used in the bitcoin whitepaper, and how Satoshi eloquently spoke about incentive:

Take note in particular of the assumption here, once again, that human beings fundamentally cannot be trusted to NOT be tempted to cheat.

And the elegance in the white paper is the usage of the Mathematical system to fend against this temptation, so that the limitations of the “trust-based system” can be overcome.

This therefore– is also the foundation and the strength of the decentralized system. =)

Reason #3: Does it matter who “Satoshi Nakamoto” is?

The whole point of the white paper, in my opinion, is to expound on the beauty of Mathematics as a means to create a highly robust system.

Why is it that to date, we still do not know who Satoshi Nakamoto is? And to Nakamoto, why should you as the reader care?

From a PR perspective, mystery will usually generate hype and keep bitcoin in the media when it first gains public attention. People will start to wonder about the genius of this positive intention backed by a robust system. And they will start to want to trace Satoshi Nakamoto down, because they would want him to create or talk about more things.

And therefore, from the name Satoshi Nakamoto alone, you can infer the essence of decentralisation and privacy–both which the blockchain technology offer.

Satoshi knows you will be asking these questions, and to me it probably is his sneaky way of hacking into your memory, and making his paper sticky in public limelight 😉

Conclusion: Satoshi’s whitepaper is more about human nature than technicalities

I was really inspired after reading Satoshi’s white paper.

Why? Because good intentions mean shit if it is not backed by a robust system. Sometimes good intentions that is not well-communicated or executed will even incur negative consequences as people start to feel rejected, betrayed, or extremely hurt.

In Greek, there is this saying that as long as you have good intentions, you can be forgiven of anything or any mistakes. While I can appreciate the kindness behind this particular statement, I cannot agree with it simply because this sort of belief encourages delusions.

In other words–in any economic/ business context– if you don’t have a robust system to support whatever “good intentions”, your company will not last. Even if it does last, you run the probability of harming some people due to the limitations of the trust-based system.

And therefore the bitcoin white paper is beautifully written– it is succinct, eloquent and demonstrates one solution whereby robust solutions can be created because of the goodness in human nature, and in spite of the worst sides of it. 🙂